All your friends know you as arguably the biggest Batman fan of all time.  You’ve seen every Batman movie in existence.  You wish you could live in Gotham city just to sneak a quick selfie with Batman if you ever ran into him.

But, the problem is, when someone visits your house they have no idea about any of this and you want to showcase your Batman pride to let the world know that you’re the real Dark Knight’s sidekick, not Robin.  In this post, we’ll cover the best Batman man cave ideas we’ve come across to let everyone know that you...are…..BATMAN….or, just a really big fan of his.

Batman is mainstream now, but it wasn’t always. As a Batman fan, you know how important it is to enjoy the things you like, even if others don’t understand them. This poster reminds you to be yourself, as if you needed a reminder. That said, while being yourself is cool, being Batman is cooler. So, be yourself...unless you can be Batman. Then, as the poster says, “Always be Batman.” This is a great piece of Batman-themed motivation, with a little humor to make you smile.

You tell the world that you’re making a Man Cave, but what you’re really doing is creating your own Batcave. Just don’t tell any Joker fans where it’s located. While you don’t have all the technology Bruce Wayne had, you can create a realistic Batcave using this inexpensive do-it-yourself technique. With this method, you can make the walls look like real cave walls. If you don’t want to do it yourself, you can always hire a contractor to texture the walls and paint them just the way you want them.

Bats are at the core of all Batman symbolism, of course. In the movies, they’re a major part of Bruce Wayne’s motivation as a hero. This means your man cave will need bats. While bat decals could work, you’ll have the lights off when you watch movies or play video games. The room should also be dark when you’re showing it off, since Batman is at his most dramatic during the night. For the drama of it, use this video tutorial to make a Batman symbol wall hanging that lights up from the back.

Your man cave needs a bar, or at least somewhere to store drinks for your movie and video game marathons. Let’s be honest, if the Batcave didn’t have a wet bar, it should’ve. Just make sure you save the drinks for after you finish saving the world. This shot glass is classy, like something Bruce Wayne would drink from. The simple bat engraving creates an elegant look, unlike a typical comic strip tumbler.

If you want something less subtle for your man cave, and you’re a fan of the comics, this do-it-yourself project is for you. With this project, you can handpick your favorite movie and comic book moments, or embrace the randomness. The instructable shows you how to make a comic book table. While the original project maker suggests butchering a comic book, printed pages from online work just as well. Use copies of your favorite comic to make the table, or pick and choose favorite images for a one-of-a-kind coffee table.

If you’re going to hole yourself up in the man cave until you beat Arkham Knight for the 10th time, you’ll need to fortify yourself with snacks. While you can use your grandmother’s white china covered bowl for candies, and stash potato chips in a plastic bowl, it’s time to step it up a notch. Use this Batman candy and snack holder to have not Alfred, but Batman himself serve you food. This decoration also works for keys, or as any kind of catch-all you need. You shouldn’t be afraid to put your best furniture in the Batcave. While you may fill the Batman man cave with junk furniture, or with classy pieces that rival the Gotham elite, you’ll want to protect the furniture. Rather than buying cheap coasters with unidentifiable nature patterns for your end tables or bar, make your own Batman coasters. While this seems like a lot of work for a small item, these instructions make it easy to make cool coasters. If you print your images out for this project, make sure they’re printed on a laser printer. Whether you favor the movies or the comic books, you probably have a collection of Batman action figures. You have the Joker, Robin, Harley Quinn, and other sidekicks and villains. Most importantly, you have several Batman action figures. One of the coolest things about collecting Batman figures is that you don’t stop after the first few. Instead, you get one action figure for each comic, movie, or video game you like. Add this Batmobile figure with Batman and Robin to your collection, and display them proudly in your man cave.

Your man cave will need a nice TV and a way to play games, but sometimes you have to choose between a nice game system and an optimized gaming PC. If you like to play games on your computer, you’ll need Batman decorations for your computer desk. This Batman mouse pad has a high-quality comic book image of Batman. This mousepad is designed for professional gamers. Unlike most mousepads, it’s big enough for both your keyboard and mouse, and creates a great gaming experience.

When you read a comic book, graphics are a big part of the experience. You don’t want poor light to interfere. You also don’t want to set the book down somewhere and risk it falling and getting crinkled. Set up a desk area to read, write, draw, and otherwise enjoy Batman books. When you do, use this desk lamp. The Batwing-shaped lamp head hovers over your desk as if it’s flying, and gives you closeup lighting for anything you want to do. Your man cave needs posters. Video game and movie posters are classic ways to show appreciation for comics, heroes, and movies. Rather than neglect this part of your man cave, get this Arkham Origins poster that shows Batman reaching forward as if he could reach through the poster itself. The print is neat, showing the darkness that’s inherent in Batman’s character. You can get it framed or laminated, but a simple, unframed poster works well, too. 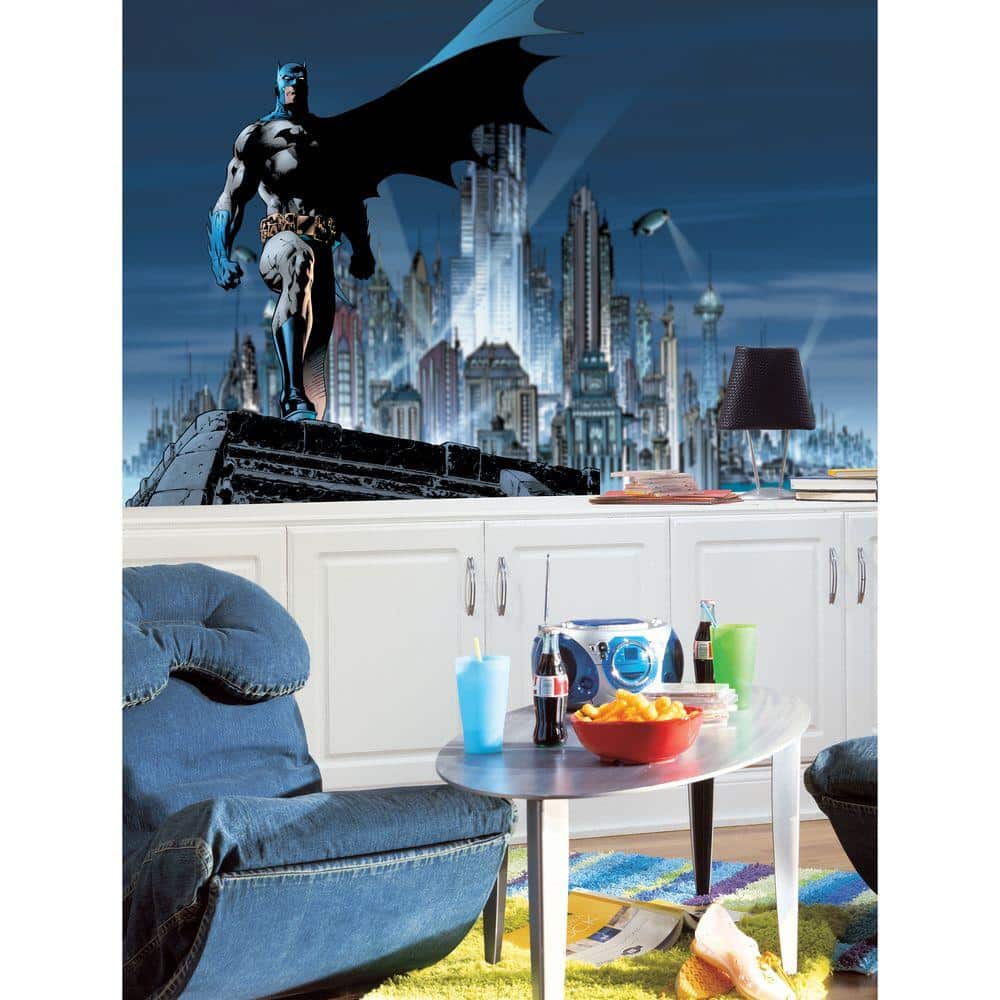 While turning your man cave into a Batcave is awesome, turning it into Gotham is on a whole new level. Make your man cave, or part of it, look like Gotham itself with this huge wall mural. The mural is over 10 feet wide and 6 feet tall, so you can fill an entire wall with it. It‘s done in a comic book style, with Batman in the very front, watching over the city. Or in this case, watching over your man cave.


While decals are common for sports man caves, they’re also a great idea for a Batman man cave. Batman is all about light and darkness, and a silhouette on a wall is the perfect way to reflect that theme. This video shows you how to create a Batman image in black. If you’re feeling brave, you can also trace the cutouts onto the wall, using them as a pattern to paint. Because this is a do-it-yourself project, you can pick any image that works for you, and choose how complex of an image you’re willing to try.

You can probably come up with 2-5 favorite Batman quotes off the top of your head. Ironically, many of those quotes were probably said by the Joker, Commissioner Gordon, or another character other than Batman or Bruce Wayne. Nonetheless, they stick with you. Show off some of the more memorable Batman quotes with this typography art. This is an image of a bat made out of quotes. The image itself is well-made, with a dramatic effect on its own. When you look closer, you can see and read the quotes. As a result, it can capture interest for longer.

What’s your favorite Batman idea? There are so many ways to make your own Batcave, and we would love to hear about anything we missed! Please let us know in the comments below.